How To Solve a Rubik's Cube Blindfolded

Solving a cube blindfolded sounds impossible at first, but I guarantee you anybody is capable of it.

You only need to know 3 algorithms, and memorize around 20 letters each solve.

Here are the steps:

Hold the cube with the white center on top, and the green center on front.

Swaps UR (buffer) with UL (target)

Look at the sticker in the buffer (UR) position, and swap that sticker to its solved position using the swapping algorithm.

The edge swap algorithm can only swap with the target (UL), but you can add setup moves to instead swap with any sticker on the cube.

Example: Swapping the buffer with FL

Example: Swapping the buffer with LF

Note: Focus on the buffer (UR) to see where to swap with. If you pick the wrong sticker to swap with, you will get a flipped edge.

Repeat this process until all of the edges are solved.

If the buffer piece (white/red) ends up in the buffer position, swap with any other unsolved piece to continue.

Note: A full list of setup moves is in the description of the tutorial video if you're stuck. However, you should not memorize these as they are intuitive.

Hold the cube with the white center on top, and the green center on front.

The concept is identical to solving edges, with minor differences:

Example: Swapping the buffer with FRU

Example: Swapping the buffer with UFR

Note: Focus on the buffer (LBU) to see where to swap with. If you pick the wrong sticker to swap with, you will get a twisted corner.

Note: A full list of setup moves is in the description of the tutorial video if you're stuck. However, you should not memorize these as they are intuitive. 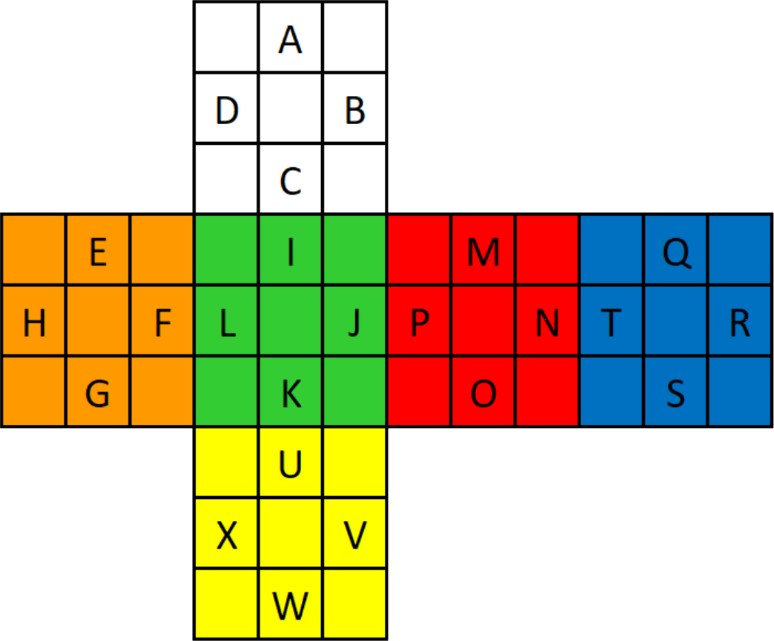 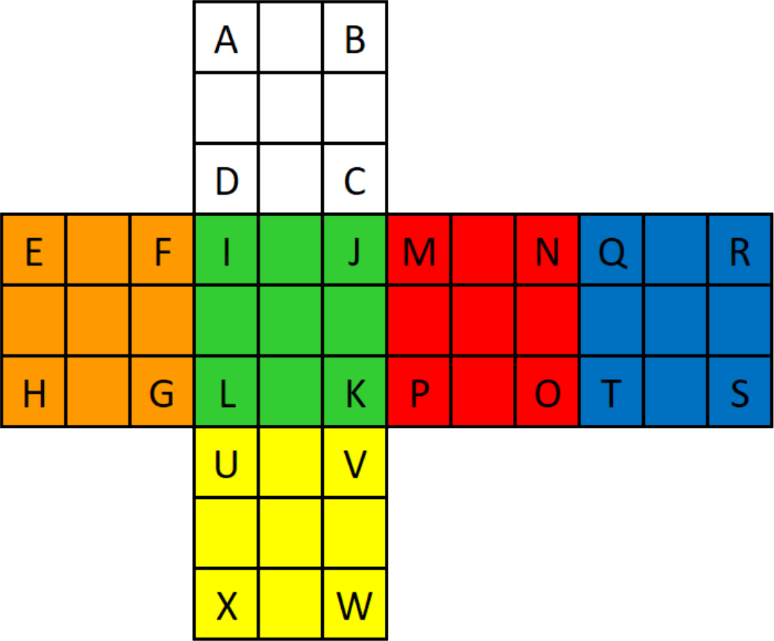 Instead of naming stickers by faces (i.e. UF edge, UFR corner), it is easier to memorize a single letter for each sticker.

Note: You will not need a new cycle if your first cycle includes every unsolved piece.

Note: It is possible for a new cycle to begin and end on different letters, as long as they are still the same piece (example: R and H). You may have to do multiple new cycles to reach every unsolved piece on the cube.

Note: There may be multiple flipped pieces.

Repeat all of the above, but for corners. Here is a summary of corner memorization using the same concepts:

Note: The number of letters for corners/edges must always be both even or both odd.

To memorize a sequence of letters, pair them up as shown above, and memorize an image for each letter pair. Next, make a story out of all the images.

A very quick star falls out of the sky, takes out its Nexus phone to photograph an ivy plant, prints the photo, and realizes the plant was actually dead. This is much easier to memorize than a sequence of 12 random letters!

Another example is shown at the end of the tutorial video.

Note: If you are just starting out, you can write down the letters to avoid memorization mistakes.

Solve the edges, possibly solve parity*, and then solve the corners.

*If the number of letters memorized for edges/corners are both odd, then do the parity algorithm between solving edges and solving corners.

Note: The number of letters for corners/edges must always be both even or both odd.

Use this between solving corners and solving edges, if you have memorized an odd number of letters for both.

For each letter you have memorized:

While solving, you do not need to think about the buffer piece, new cycles, or flipped pieces. As long as you solve each letter in your memorization, the cube will be solved in the end.

Another walkthrough solve is in this video, showing new cycles and flipped pieces. Also, check the description of the tutorial video for answers to common questions.

The M2 method is a much faster way to solve edges, but it has more special cases to deal with. Once you can do blindfolded solves consistently, I recommend learning the M2 method, as well as other advanced blindfolded techniques.

How To Get Faster at Blindfolded